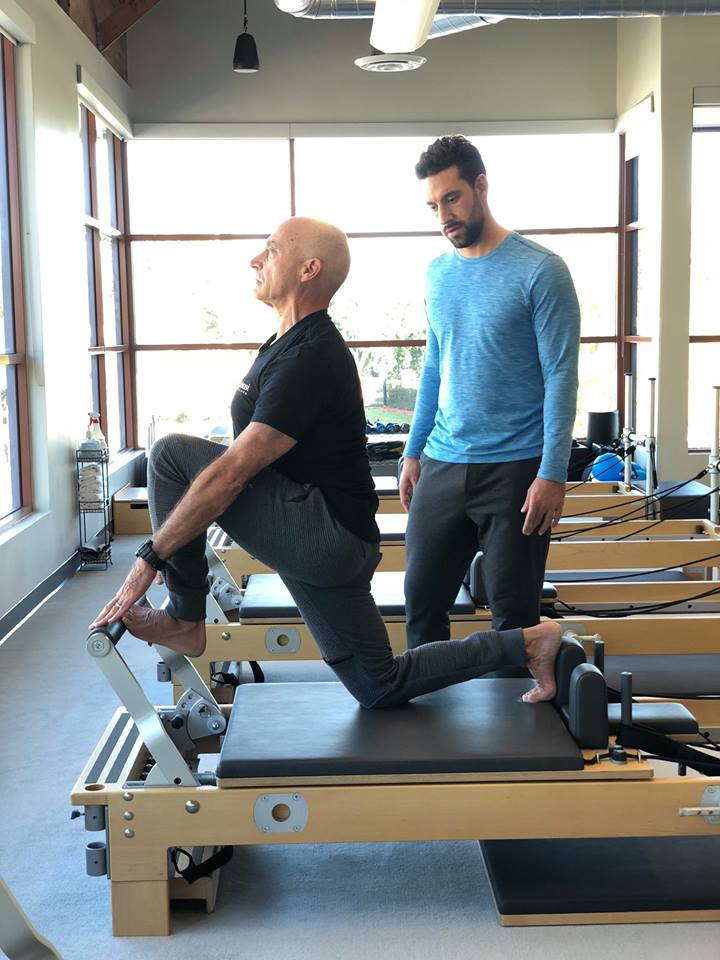 Hi, my name is Ryan Kalish and I’m a former major league baseball player. I played professionally for 12 years and now after that career, I’m transferring to become a BASI Pilates instructor and I’m so excited about it.

Besides being a baseball star, in high school you were also playing football and basketball. Is there a sport you don’t enjoy?

So as far as sports are concerned when I was growing up there was really nothing that I shied away from. I liked everything. You know, in high school I played baseball, basketball and football but growing up whether it was stickball or soccer or handball, I was always down to try it out and play. Athleticism has always been my thing.

What was the most important moment of your baseball career?

My favorite and most important baseball career moment is probably my first major league home run. I hit it at Yankee Stadium–it’s really close to where I grew up. My whole family was there, all my friends. I mean I was playing against Derek Jeter who was my idol growing up and the next day he actually congratulated me on the home run. He said, “It must have been so cool to do it, close to home” and that was just such a special moment that I’ll never forget.

What is the best and worst thing about being a professional athlete?

I’d say the best thing about being a professional athlete is being able to follow your childhood dreams. You know, when you’re growing up you don’t really dream that you’re going to have this opportunity to play a game for a living and I had that opportunity so I’m really thankful. And the worst thing in my opinion are injuries. I had 14 surgeries in my career so my body has been super beat up. I’d say that risk that you take for your body is the worst part of it.

What drew you into the world of Pilates?

So I already mentioned my 14 surgeries, but my last 4 were my knee. After the first 2 on my knee I was rehabilitating in Vail, CO where I was introduced to a Reformer in my PT clinic. Then shortly after that I was introduced to an actual BASI instructor, Jennifer Lucas, out in Vail, CO. I started working with her and from there I was hooked. I really loved the low impact, hard workout that it gave me. Obviously I’ve been doing it ever since.

In what ways do you think baseball players can benefit from Pilates?

I personally think Pilates is so applicable to baseball because it’s a very, very rotational sport and a very, very precise sport. As a hitter, which I was, you have to meet a baseball coming at you with a round bat in this really small zone. They’re throwing the ball 95-97 miles an hour, curve balls at 80. All these different mixing and matching, trying to get you out, and we are rotating around our center of gravity. So with that being said, that’s basically what Pilates is. It’s working on our core, it’s working on our center to be more precise, and if your head can stay that much more still because your abdominals are stronger, then I think you’re increasing your chances of doing well. So for me that’s a huge reason why I want to have it, become more involved in baseball with time, and it’ll be really exciting for me.

What made you choose BASI?

I chose BASI because I just really liked the passion that was with it. I really liked the precision, the deep breath patterns, the following of really strategic movements, and then I saw the videos of the studio and Rael. It was just really hard to not choose that as my education, and now that I’ve gotten even more into it, I’m even more thankful now that I’m here working at BASI Headquarters as an apprentice. I’m really getting great knowledge, all the teachers are really down to help you become the best mover and teacher possible, and I’m so thankful that I did it.

What are your future goals regarding Pilates?

So as far as my future goals with Pilates are concerned right now, they are limited to becoming the best teacher I can possibly be. I want that to be the first and foremost thing so that I can preach the messages as best as I can, but in the future I mean I’d obviously love to spread the word to more baseball players and certainly other athletes. I think personally I was missing something like this throughout my career so you know, getting it into the youth sports and obviously anyone who’s just beginning their professional careers. I also really enjoy the studio setting here and just spreading the word to anyone–doesn’t matter age, nothing. I just really love teaching it so we’ll see what comes of it. Right now, I’m just trying to become the best teacher possible.

Thank you Ryan, we love having you at the studio, too.