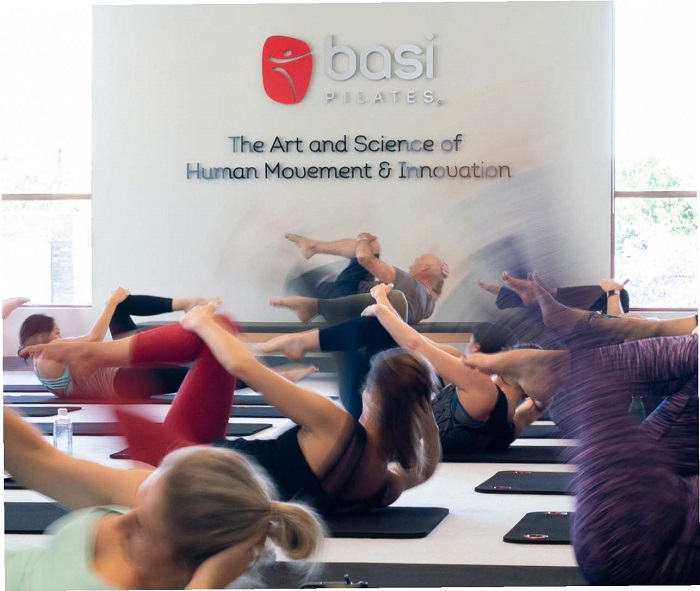 My mind is completely blown every time I think about the fact that I get to learn in BASI’s remarkable Legacy Program. Less than five years ago, I was not even sure what Pilates was and it was by sheer luck that I stumbled my way to Beach Pilates, a proud BASI host studio in Toronto, Canada. Pilates pretty much was love at first “Magician Bottom Lift,” and there was no better place to cultivate that love than with BASI.

After experiencing the Comprehensive Program the first time, second time, third time, fourth time (and I’m sure many more times to come), it was clear I was hooked. This Pilates addict could not get enough of learning about Pilates. I recalled browsing through the BASI website one night and reading about the Legacy Program, which consists of the Mentor, Master I, Master II, and the Honors. I knew immediately that the Legacy program would be part of my journey, and it became a goal to work towards.

To date, I have completed the Mentor, Master I, and Master II courses, and I am looking forward to attending the Honors in May. There are so many spectacular aspects of the Legacy Program I would love to share with you, but in an attempt to write with some coherence, the top two things I would like to highlight about the Legacy Program are: the people and the love of Pilates. 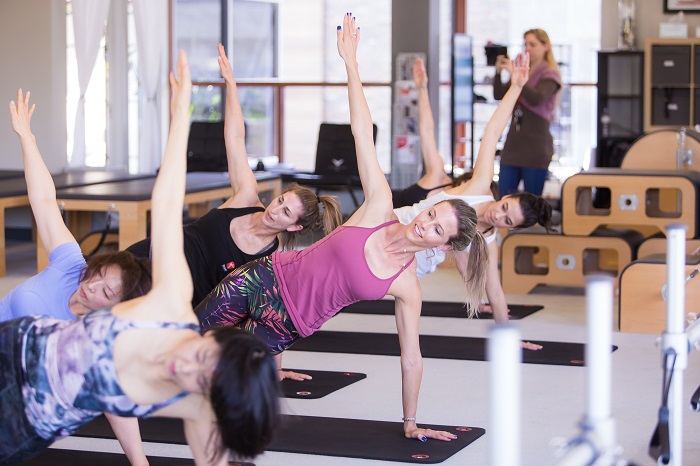 The People – My BASI Family

The Mentor Program was the first time I had the opportunity to visit the beautiful BASI-land (what I affectionately call the BASI headquarters), and it was also the first time I had the opportunity to meet and learn from Rael Isacowitz. I was over-the-moon excited, and properly nervous. After all, Rael was a legend; he had penned the very first Pilates book I owned and developed the work I had studied day in and day out for the past few years. I was trying my best not to fan-girl too much, while feeling apprehensive, the way you would feel when meeting someone important. It turns out my nervousness was completely unwarranted.

Rael is one of the warmest, most caring, and kindest individuals I have met, and he exudes genuineness, humility and humanity. Not only did he welcome us as family, but he also made it a point to start each day of the courses with meaningful introductions of ourselves. This sets the tone by making it apparent that building relationships and making connections matter. The Legacy Program was a place where we united as a community of like-minded Pilates geeks who love what we do.

When I signed up for the Legacy Program, the last thing on this introvert’s mind was making friends. It was not the intended outcome I had pursued when I registered, yet it was one of the most rewarding results of attending the Legacy Program. There were dedicated Pilates professionals from all around the world. I met new friends from Indonesia, Qatar, Belgium, Dubai, South Africa, Japan, Ukraine, Brazil, United States, and so many more countries. Everyone had to work hard somehow to get there—practicing diligently, saving up, making significant arrangements and sometimes sacrifices in their lives in order to be there. All the attendees valued so much to be there, and no one was taking a single moment for granted.

One of the most joyous things to see was that after full days of learning, the next morning, you would find everyone arriving early to attend more classes or to practice the new material we’d learned together. So many were enthusiastically staying at the studio until the very last possible moment when we each had to depart for the airport. These were some of the most passionate Pilates professionals you will have the chance to meet, who are incredibly encouraging, supportive, and lovely. I firmly believe that the nature of the Legacy Program attracts the best type of studious, passionate, positive students the industry has to offer. They are the very reason why I’m eagerly counting the days til I get to see some of them again in the Honors!

Also in attendance in the program were BASI Faculty members. Some were assisting, some were attending, and some were auditing. To be able to learn from them and learn with them was indescribably amazing. Each were masters and heroes in their own right, and to be able to observe the way they approach the work, the way they study movement, and the intensity they bring to the exercises and to learning was nothing short of inspiring. One of my favourite moments from the Legacy Program experience was witnessing the assiduity and camaraderie they had in studying Pilates. Hashtag: #LifeGoals.

Last and certainly not least, the people that made the experience superb included the program and studio organizers. The BASI staff treated us with incredible hospitality, friendliness, and care. We felt extremely taken care of from beginning to end, which made the entire learning experience feel more like a dream vacation (which, in my case, actually is a dream vacation realized). With such great people designing, organizing, assisting, and attending the program, I do believe that the BASI family is the best part of the Legacy program.

The other key component that I would like to gush about is, of course, the content of program itself! Any attendee will be quick to acknowledge that the Legacy Program is born out of a labour of love. There is such great heart, thought, and thoughtfulness put into the curriculum, the repertoire, and the flow of the courses. Rael’s passion pours out of each exercise and each page of the beautiful manuals. These manuals are of high quality, a good reflection of the high calibre education we were receiving through the Legacy Program. When you experience the Legacy Program, you realize that you are embracing something far greater and higher than just learning choreography of new exercises. In the program, you are contemplating, meditating, and discovering deeper concepts of the Pilates work. To me, the biggest impact the Legacy Program has on me as a Pilates professional is teaching me how to go deeper with the work and compelling me to want to go deeper in the work always. Experiencing the content of the program truly is experiencing the love of Pilates.
There are so many new exercises (a.k.a. new challenges) for me to engage with and play with! I am ecstatic. What surprised me, though, was my renewed love for the most fundamental exercises we learned in the Comprehensive Program. Now that I see where the “simple” (are any Pilates exercises actually simple?) exercises are going to progress to, I have never been more determined to work on my Pelvic Curl, my Spine Twist Supine, my Chest Lift, or my basic Back Extension. In fact, so many of the Comprehensive Program exercises suddenly “make sense” in a new light. 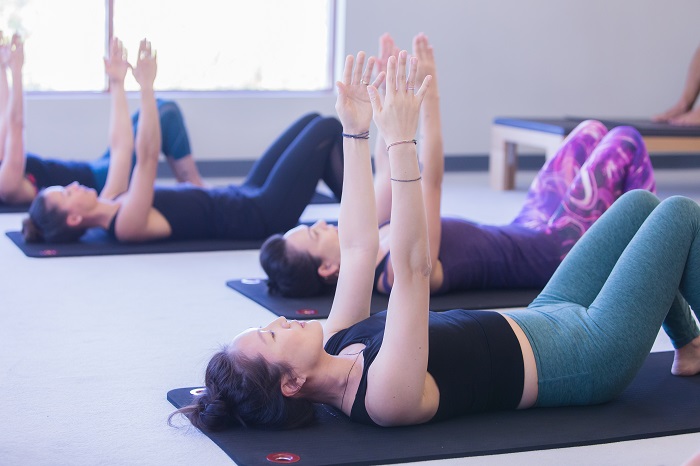 It is no secret I am not the most physically capable, nor the most knowledgeable, and I was worried about whether or not I would survive the Mentor, Master I, and Master II programs. Let me be frank: the exercises are hard. However, I was ready to work hard and there was not a single moment where I regretted being there. The learning environment was non-judgmental and extremely supportive. I felt welcomed and at home amongst my peers, eagerly consuming the new material with a hungry mind. The expectation is not for us to achieve these exercises within the time of the courses. Instead, each of us now had many more fun exercises to now practice and conquer in our days, weeks, or years of practice to come! The Legacy Program is an exciting launch to the next phase of our Pilates journey.

Learning the new material also meant that as an instructor, I now had more tools in my toolkit. By learning the various exercises, not only did we gain knowledge about individual exercises themselves, but the courses prompted us to think creatively to explore various options that we can consider when designing programming that would be better suited or that would appropriately challenge our clients. The Legacy Program equipped me with an ability to think more critically about how I can help progress my clients on their journeys.
Coming home, I could not wait to get into the studio to practice the repertoire and to geek out with my Pilates instructor about the work. My new BASI friends may live in other parts of the world from me, but they have continued to cheer me on online as I cheer them on, on their journeys. After completing the Mentor Program, I knew I would register for the Master I and Master II programs immediately. While completing the Master I and Master II programs, I did not wait to sign up for the Honors Program because the Legacy experience enriches me in so many ways. It has changed the way I practice, the way I train, the way I teach, and even the way I live. I am filled with such an immense sense of gratitude for the Legacy Program. There is no question in my mind that the Honors Program will make a difference in my life and I will be revisiting this Legacy Program in its entirety in future years to come.

Looking back, I recalled in March 2015 my Pilates teacher, Laura Lynn forwarded me an email of someone sharing their experience with a BASI program. It helped confirm my consideration to commit to one. My hope in sharing my positive experience today is that it may also confirm yours.
Let your fun begin.

Source: From the BASI Gazette – Issue 04

The Exercises That Complement Pilates & Will Improve Your Health

Pilates in the ERA of Covid-19

Why Pilates is the Perfect Fit for the New Year

10 Reasons Why You Should Do Pilates

Pilates Can Help You During the Holiday Season